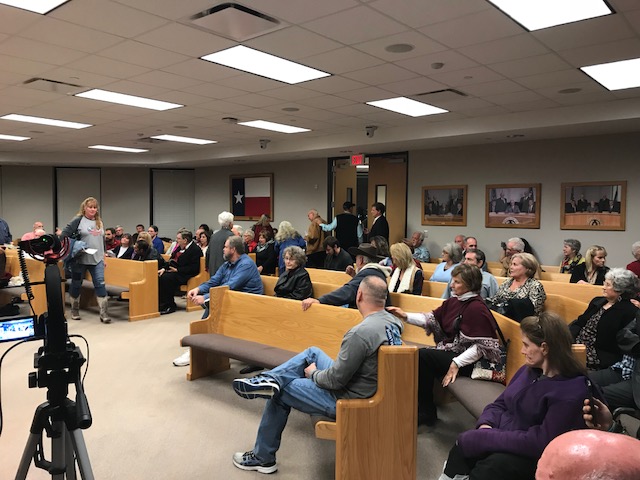 Image: Montgomery County GOP Chairman Wally Wilkerson walked out of his own illegal meeting after he was unable to gain control of the improperly-called event on November 27, 2018. Wilkerson is in the brown jacket in the center back of the photograph seen on his way out the door.

Conroe, November 28 – Montgomery County Republican Party Chairman Wally Wilkerson, whom the State Republican Officials Committee (OC), found on October 2, 2018, that he “engaged in behavior to disgrace the Republican Party,” walked out of his own illegal meeting of the Republican County Executive Committee (CEC) last night, after he was unable to gain control of the meeting. At least two members of the OC – Mark Ramsey and Terry Holcomb – were attending the meeting. Both Ramsey and Holcomb signed the letter which contained the ruling against Wilkerson less than two months ago.

Wilkerson held an organization meeting of the CEC on June 26 where the elected Republican Precinct Chairs voted to pass new Montgomery County Republican Party (MCRP) Bylaws. Wilkerson declared the adoption of the new Bylaws but decided two days later that he didn’t like the fact that the new Bylaws took authority away from him and dispersed it among grassroots volunteers.

Under the Bylaws, CEC meetings require 14 days’ notice to the Precinct Chairs. Wilkerson refused to comply with that provision and only provided 7 days’ notice for the meeting last night.

Almost immediately after the prayer and the Pledges of Allegiance to the United States and Texas Flags, MCRP Steering Committee member Jon Bouche stood up for a point of order that “This meeting is invalid because it was not called with proper notice.” Wilkerson ignored Bouche entirely and said, “We’re going to proceed.”

At least six other Precinct Chairs stood and called “point of order.” Wilkerson ignored all of them and said “We have several officeholders here.” Wilkerson only introduced 359th District Judge Kathleen Hamilton and Montgomery County Clerk Mark Turnbull. Wilkerson failed to introduce more than half a dozen elected officials sitting in the room.

While Wilkerson made those introductions, several other elected Precinct Chairs attempted to make points of order, which take precedence over other proceedings under the Rules of the Republican Party of Texas and under the MCRP Bylaws. Wilkerson ignored all of them.

Wilkerson then said, “Mr. Turnbull is our Party Treasurer and he will give a report.” At that point, complete pandemonium broke out, because the MCRP Treasurer whom the Precinct Chairs elected at the June 26, 2018, CEC meeting over which Wilkerson presided is John Wertz.

Wilkerson refused to recognize any of the Precinct Chairs who sought recognition from the Chairman. As a result, Steering Committee member and Precinct Chairman Brian Crumby stated, “If you’re going to vacate the job of the presiding officer, we need to replace you.”

Turnbull attempted to deliver his fake Treasurer’s report but with all of the other discussion occurring was not audible.

Wilkerson then attempted to present awards which he unilaterally chose to give without seeking approval of anyone else, including the duly-authorized MCRP Steering Committee. Wilkerson gave the Headquarters Volunteer of the Year Award to Dorothy Hart. There is no official “headquarters” for the MCRP, however.

Numerous Precinct Chairs continue to make points of order to object to the proceedings without proper notice, but Wilkerson ignored all of them.

Wilkerson then announced the “Volunteer of the Year Award” which Wilkerson gave to Montgomery County Clerk Mark Turnbull, who receives a government salary of $129,974.92, plus taxpayer-funded employee benefits of approximately $52,379,89, for total compensation of $182,354.81. Turnbull ran for re-election in the March 6, 2018, Republican Primary Election and on the November 6 General Election ballot. Therefore, it’s unclear how Wilkerson considers Turnbull as a “volunteer” since he is not even the elected MCRP Treasurer, who is volunteer John Hill Wertz.

Needless to say, there was almost no applause for Wilkerson’s bizarre behavior.

Wilkerson then announced he was recognizing Precinct Chair “Charlie Parada to make a motion.” Parada moved to appoint several people as Precinct Chairs. There was no second for his motion. Wilkerson quickly announced “the ayes have it.”

At that point, Republican Precinct Chairman Mark Frank began screaming, “I’m half of y’all senior and I’m tired of you acting like children.” It’s unclear to whom Frank addressed his remarks. Frank is probably a quarter of Wilkerson’s age. Frank seemed to be directing some of his ire at Parada who rudely interrupted many other people trying to speak.

Two Precinct Chairs asked Vice Chairman Reagan Reed if Reed would preside over the meeting. Reed responded, “I have no interest in chairing this meeting, because the bylaws require 14 days’ notice, so it is not a legal meeting. I asked Wilkerson to postpone the meeting to give the proper 14 day requirement. Dr. Wilkerson didn’t postpone the meeting. We’d be happy to have a meeting with proper notice.”

It’s clear that Wilkerson has no intention of complying with the Texas Election Code, the Republican Party of Texas Rules, or the MCRP Bylaws. Wilkerson has made clear previously that, in his view, MCRP is not “a part of the Republican Party of Texas.” The SREC directed Wilkerson to work under the MCRP Bylaws, to turn over the Party’s financial accounts to Treasurer Wertz, and to recognize the CEC elections of officers at the June 26 meeting.

Wilkerson made clear last night directly in front of the OC’s Mark Ramsey and Terry Holcomb that Wilkerson has every intention of continuing to “disgrace” the Republican Party.

GOP’s “disgraced” Wilkerson storms out of his own illegal meeting with State Republican Officials Committee members watching added by admin on November 28, 2018
View all posts by admin →