Volunteers provide massive outpouring of relief to Harvey victims, show Harvey that it’s nothing of a flood compared to the love of County residents towards one another 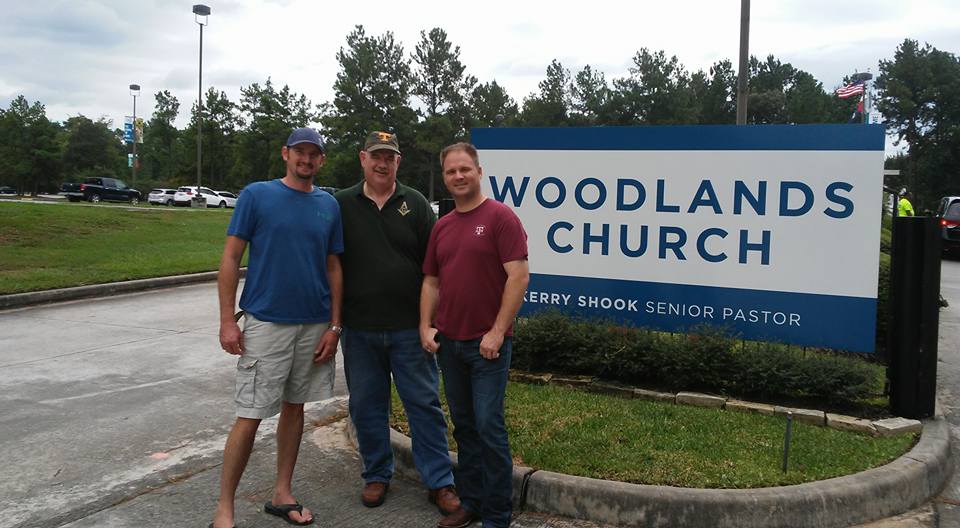 Image: Some of the leaders of Oakwood Masonic Lodge #1444 provided food for over 150 people after a group of the Lodge members cooked for the victims of Tropical Storm Harvey and delivered it to Harvey victims at the shelter at Fellowship of The Woodlands Church. Left to right is Kevin Bayer (Senior Warden), Dan Barnes (Master), and Ryan Hutson (Chaplain).

Conroe, August 31 – Volunteers across Montgomery County unleashed an outpouring of relief to Tropical Storm Harvey victims that made Harvey pale in comparison as a flood. Conroe, New Caney, Montgomery, Willis, The Woodlands, Spring, Pinehurst, Magnolia, Cut N Shoot, Grangerland, Splendora, Porter, and all surrounding areas and cities were places of love, compassion, and kindness throughout the entire day on August 30, 2017, and well into the morning (at press time) today on August 31.

If you’ve ever traveled to one of the Seven Summits and felt and observed the common bond of love and affection among people who had climbed far, worked hard, and achieved a common goal, those feelings are mere sentiments in comparison to the wonderfully positive feeling among the real people of Montgomery County. People without titles who didn’t seek attention or affirmation on social media were the greatest leaders in our community.

The members of Oakwood Masonic Lodge decided as individuals early in the morning on Wednesday, August 30, 2017, to gather together to cook food to feed approximately 150 victims of Tropical Storm Harvey and the volunteers who are seeking to help those victims. Dan Barnes, a general contractor and Master of the Lodge, Kevin Bayer, also a general contractor and officer, and Ryan Hutson, a Reserve Precinct 3 Deputy Constable, renowned realtor, and the Lodge’s Chaplain, led other Lodge members in preparing a giant meal of ham, homemade cheese and macaroni, green beans, and corn bread in the Lodge’s kitchen.

After the meal was ready for delivery, the amazing fun began. They contacted Precinct 3 County Commissioner James Noack, who has done an amazing job as a community leader over the past five days. Noack informed the Masons that the Community Center had more food than they could take. Noack suggested that the Masons contact Precinct 3 Operations Manager Matt Beasley (also a member of the Lodge).

Beasley checked to see if the Timber Lakes Timber Ridge Fire Department might want the food. The TLTR VFD also had more food than they could use. Beasley suggested that the Masons contact Precinct 4 County Commissioner Jim Clark.

Clark, also a Mason, was very thankful for the food offer, but he explained, “We currently have 125 people in the East Montgomery County shelter, but the great people of our area have provided enough food for 400 people!” Clark suggested contacting Precinct 2 County Commissioner Charlie Riley, also a Mason.

Riley’s response was nothing short of bizarre. When the Masons contacted Riley and spoke directly with him by telephone to offer food to feed 150 people in Commissioners Precinct 2, Riley hung up the telephone!

The Masons then contacted the shelter for Harvey victims which Fellowship of The Woodlands Church was running on State Highway 242 at the Church’s main campus. The very friendly people at the Church said they would welcome the food and appreciated the Masons preparing and delivering it to them.

Barnes and his Masonic cohorts delivered the food, briefly helped with some setups at the Church, and then left to share their kind hearts with others in Montgomery County.

Montgomery County is truly a great community known for compassion, kindness, and love.

Volunteers provide massive outpouring of relief to Harvey victims, show Harvey that it’s nothing of a flood compared to the love of County residents towards one another added by admin on August 31, 2017
View all posts by admin →