Representative White fights against Chinese Coronavirus restrictions: “We do not need to be the Chinese Communist Party to defeat this virus” 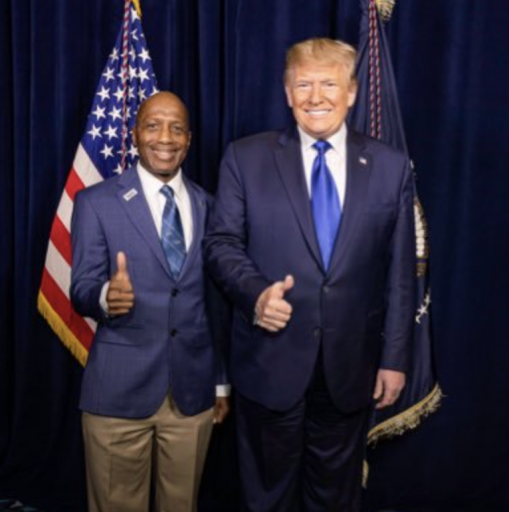 Image: When State Representative James White (left), Republican of Hillister, met with President Donald Trump, they immediately took a liking to each other.

Austin and Jasper (Texas), October 23 – State Representative James White, a conservative Republican who represents House District 19, which includes portions of Hardin, Jasper, Newton, Polk, and Tyler counties, has vigorously fought against government mandates in response to the Chinese Coronavirus panic. White coined the phrase, “We do not need to be the Chinese Community Party [CCP] to defeat this virus.

On October 15, 2020, Representative White made clear that he does not believe government has the right under the United States Constitution or the Texas Constitution to restrict access to members of the clergy just because government leaders have panicked in response to the virus and its spread. White sent a letter asking Texas Attorney General Ken Paxton whether

In March, 2020, Montgomery County Judge Mark Keough decided to shut down churches by government order. His sweeping lockdown order on March 27, 2020, prevented churches from holding services and prevented people even from seeking meetings with their spiritual advisors. Fortunately, after an entanglement with a certain breakfast food, Keough changed his approach and now claims that he believes that government mandates forcing church closures are illegal and unconstitutional.

Several months ago, White asked Governor Greg Abbott to clarify that his unconstitutional lockdown orders do not prohibit fit, loving, and responsible parents from being at the bedside with their hospitalized sick children. “I can feel his heart,” White wrote to Governor Abbott with respect to a father who could not sit with his sick child in the hospital due to Abbott’s illegal executive order. “The prospect of his daughter going to the Lord, while he is sitting in the hospital parking lot, is heartbreaking.”

In his letter late last week, the conservative Republican challenged the decision by Abbott and the Texas Department of Criminal Justice, Institutional Division, to prevent prison inmates from have accessing to members of the clergy during the Chinese Coronavirus panic. White asked Texas Attorney General Ken Paxton to rule that the United States Constitution’s right to free exercise of religion still applies in Texas and even in Texas’ prisons.

“Without the free exercise of religion, there is no freedom of speech, press, or assembly,” White wrote to General Paxton. White specifically asked whether “…any government agency or official [can] direct anyone to restrict a citizen’s free exercise of religion by the requiring that the citizen face the immediacy of death in order to see a clergy of their choice?” Specifically, White, who is Chairman of the Texas House of Representatives Corrections Committee, referred to the two exceptions to Governor Abbott’s order prohibiting prisoners from consulting with members of the clergy: (1) if they face imminent execution, or (2) they are on their death bed.”

“The constitution right of freedom of religion is too dispositive to become a viral casualty,” White told Paxton in requesting Paxton’s opinion on the fundamental constitutional issue.

It has recently become obvious that Abbott has switched parties and ideology elsewhere away from the conservative base of the Republican Party. Perhaps White has identified Abbott’s true proclivity towards the CCP.

Representative White fights against Chinese Coronavirus restrictions: “We do not need to be the Chinese Communist Party to defeat this virus” added by admin on October 23, 2020
View all posts by admin →