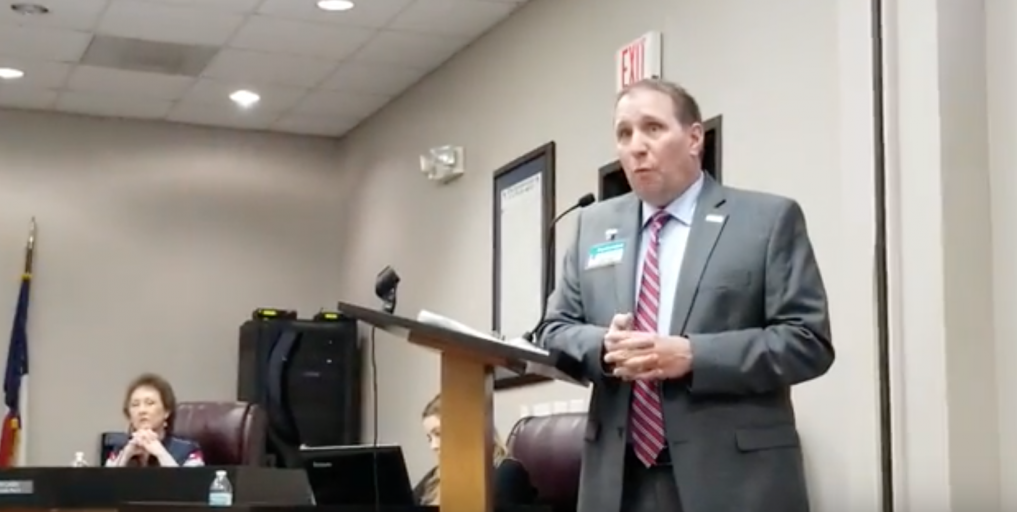 Montgomery County, December 14 – Curtis Null, Superintendent of the Conroe Independent School District, is the Sixth Most Powerful of the Power Top Ten, the ten most powerful people in Montgomery County.

So far, The Golden Hammer has named four (six counting ties) other people in the Power Top Ten:

Curtis Null, Conroe Independent School District’s (CISD) Superintendent, is the sixth most powerful person in Montgomery County. Null oversees a multi-billion dollar real estate empire, runs the county’s largest school district, collects more taxes from private citizens than any other governmental entity, and does all of that with hardly any fetters at all (other than the state and federal education bureaucracies).

Null is a wonderful communicator and is willing to say just about anything as long as it will bring more dollars into CISD. He holds a doctorate in “leadership.”

Curtis Null is a nice guy and has a gift for coming across that way when he makes presentations to groups such as the Chamber of Commerce meetings which love every word emanating from his mouth. There’s a nicer and better version of Null, however, which one gets to see when he visits school campuses. There’s no question whatsoever that Null loves the children of CISD. He enjoys seeing them thrive academically and in athletics the latter of which was his primary means of rising through the administration of the school district.

The two school bond referenda in 2019 tell part of an important story about how Null harnesses power to get CISD the money he and the other top-level administrators want to borrow, tax, and spend. The first referendum, $807 million, was far too ambitious and included far too much truthful information for voters to evaluate it and come to the decision that it was a terrible proposal. It failed on May 4, 2019.

The second referendum, $653 million, was actually the same as the first (with two relatively small changes) but with (1) far less information made available to voters, (2) far more careful control of the limited information the school district disseminated, (3) a political campaign using tax dollars rather than private contributions from the vendors who will benefit from the construction contracts under the bond package, and (4) some financial skullduggery to make the proposal appear far more benign to the bottom line of taxpayers than it really was. The second referendum also benefitted from the Texas Legislature’s decision in House Bill 3 and Senate Bill 2 during the 86th Legislative Session to spend the state surplus on so-called “property tax relief” which was actually nothing of the sort and on a teacher pay raise ($1,000 of which was “discretionary” and provided Null and the school district with a tool to scare teachers into campaigning openly for passage of the bond). It passed on November 5, 2019, although a $23.7 million Proposition B for artificial turf thankfully failed. Null got it passed.

Null showed he could harness his resources to get done what he and CISD’s vendors wanted to get done. That is the definition of “power” in this series of articles in The Golden Hammer.

Null has had a very good 2020. His Board of Trustees is not that at all. Instead, the seven-person Board is better likened the “Board of Sleeping Robots.” The seven Board members largely do what they’re told to do, listen quietly, and behave as well as a group of first-graders whom a heavy-handed home room teacher has effectively frightened.

A small group of Republicans largely from the Young Republicans of Montgomery County had previously provided some citizen oversight of CISD. They have lost interest. Some of their leaders have gone on to their own elected office. One of their main leaders, Jason Millsaps, runs the Montgomery County government and is the Seventh Most Powerful Person in Montgomery County on this Power Top Ten List. Millsaps is busy with other matters than CISD.

The Chinese Coronavirus also helped Null and he took full advantage of it. Parents and taxpayers are too frightened of the virus to provide any sort of oversight or even much in the form of complaints about the school district. COVID-19 has been one of the greatest power boosters, which governmental institutions have ever enjoyed in the history of the American Republic. Through a tax increase and a huge spending increase, Null has expanded the power and spending of CISD very effectively during the so-called “crisis.”

Curtis Null truly gets things done, as he is focused on expanding the reach of government largesse.