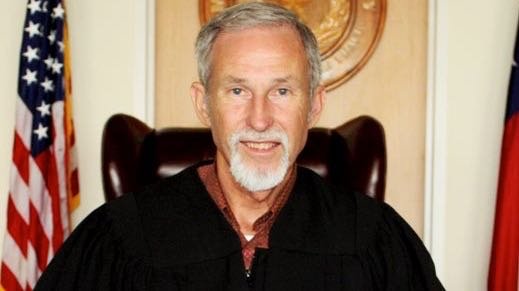 New Caney and Conroe, July 7 – Precinct 4 Justice of the Peace (JP) James Metts abused his power as a judge by filing a lawsuit in his own court on behalf of “Montgomery County” where he sued Montgomery County Information Technology Department Director Marshall Shirley. Metts acted as the plaintiff, the plaintiff’s lawyer, and the judge in the same case in which he issued an illegal injunction order where he ordered Shirley to turn over government files, records, data and information to a private law firm. JP courts do not have jurisdiction or power to issue injunctions.

To make matters worse, after The Golden Hammer sought to look at the court file for Metts’ bizarre lawsuit on June 21, 2017, Metts, through his so-called “Communications Coordinator,” lied and claimed the file did not exist. The Golden Hammer obtained the file through two confidential sources. The County’s legacy computer system shows the lawsuit file number.

During 2012 and 2013, the County formed an employee committee entitled “the Integrated Justice Steering Committee” (IJIS) to research and evaluate integrated software to store, retrieve, and manage court data. Only County employees were to serve on the IJIS Committee, but Metts insisted that Marc Davenport, whom Metts introduced as a “sworn deputy” in his Justice of the Peace Office, be permitted to participate in the meetings as well. Several employees who attended IJIS meetings, but have requested confidentiality of their identities, have described Davenport as “creepy,” “sleazy,” and “demanding.”

A dispute arose between Metts, Davenport, and some of the other justices of the peace on the one hand and all of the other courts – the 8 District Courts, the 5 County Courts at Law, and Precinct 3 JP Edie Connelly – on the other hand. For some reason, Metts and Davenport insisted that the Court should use a database program by the name of “NetData” on which to keep court files, so that an outside law firm, Graves Humphries Stahl, could then conduct collections of fines and fees for the courts. Judge Connelly, the five County Court Judges, and the eight District Judges did not feel comfortable permitting an outside law firm to contact County litigants for a variety of reasons, including due process, privacy concerns, and efficiency.

Eventually, the four Metts-Davenport courts (JP 1, JP 2, JP 4, and JP 5) went with the NetData software which does not permit the public to access court files online. Meanwhile, all of the other courts in Montgomery County utilize Tyler Technologies’ Odyssey database, which does permit public access. The Court collections of Judge Connelly’s JP3 Court are strikingly higher than all of the other four Justice of the Peace courts added together, so it’s very clear that the Odyssey database and the County’s collection efforts are far more efficient than NetData and Graves Humphries Stahl. Please see “Montgomery County Justice Courts Reveal Stark Financial Contrasts,” The Golden Hammer, June 22, 2017.

The IJIS Committee meetings proceeded far from smoothly, particularly as a result of heated conversations between Metts and Davenport on the one hand and Information Technology (IT) Director Shirley on the other hand. In early May, 2012, Shirley, as IJIS Committee Chairman, sent a letter to the entire IJIS Committee membership in which he described the events to date and included the following statement:

In response to Shirley’s letter, Metts sent a rambling email of his own on May 10, 2012, in which, while quoting the Bible, Metts stated, “It is time for Montgomery County officials to find out who is being steered and who is being railroaded.” Despite numerous pointed questions to Shirley in front of the large group of the email’s recipients, the District Courts, County Courts at Law, and Precinct 3 Justice Court continued to move forward with what later was clearly the correct decision – for the financial wellbeing of the County and its taxpayers as well as for due process and open courts – to implement and utilize the Tyler Odyssey database and software application.

The tensions between Metts-Davenport and Shirley continued into 2013 as numerous County Departments proceeded to implement their choice of the two different database programs for the court system. Since Metts had excluded the IT Department from his court’s database, Metts and Davenport needed to get the existing database of court information in order to migrate that data into the NetData system. Apparently, the County and its IJIS Committee didn’t proceed quickly enough for Metts and Davenport.

Therefore, on April 10, 2013, Metts engaged in some of the most bizarre conduct in the history of Texas jurisprudence. As the sitting judge in his own court, Metts filed a lawsuit styled “County of Montgomery versus Marshall Shirley” under Docket Number 2013185. The legacy computer system shows the following data:

All of the critical documents mentioned in this article are shown at the end of this article.

To make matters even more strange, Metts typed out a lengthy “ORDER TO RELEASE INFORMATION,” which Metts signed as the judge (!), in which he stated:

“It is, therefore, ORDERED by the Court that Marshall Shirley, Director of Information Technology shall by the close of business on 15 April, 2013 release any and all files, records, data, and information of this Court to Graves, Humphries, Stahl, Ltd and their agents.

Justice of the Peace Courts do not have legal authority or jurisdiction to issue orders of that nature under the Texas Constitution or any Texas statute. Only courts of record – County Courts at Law and District Courts – may issue orders or injunctions requiring people to do something or to refrain from doing so.

Needless to say, Shirley was more than a bit surprised when the County for which he was a Department Director sued him. Seals served Shirley on April 11, 2013.

Shirley then did what any good County employee should do when he or she is served with lawsuit papers. He went to consult with the County Attorney, J.D. Lambright, the one person in Montgomery County who actually does have the authority to file a lawsuit on behalf of the County. Lambright declined to give an interview for this article. Two sources inside of Lambright’s County Attorney’s Office and one source inside of Shirley’s IT Department all confirmed that Lambright advised Shirley to “ignore the lawsuit but stay away from Constable’s Precinct 4.”

Eventually, the IT Department did assist in the data migration to the NetData database.

On June 20, 2017, a confidential source advised The Golden Hammer of the bizarre Metts lawsuit against Shirley and provided a copy of the legacy data from the County’s old database system.

On June 21, 2017, the staff of this newspaper visited East Montgomery County. First, Constable Hayden’s Office was unable to provide any information about Metts’ lawsuit other than the information shown on the legacy database (see document below).

Therefore, the staff proceeded next door to Judge Metts’ court office. Judge Metts’ staff confirmed that court files are not available for the public to view them. Therefore, the court clerk suggested that an “open records request” would be appropriate. The Golden Hammer‘s Publisher hand-wrote a request and gave the clerk a copy.

The next day, on July 6, 2017, The Golden Hammer obtained the court file through another source inside the Montgomery County government. The entire file is below.

Besides all sorts of ethical problems with his bizarre behavior and clear abuse of power, Metts violated several laws along the way.

It’s a crime under Texas law if “the person recklessly causes to be delivered to another any document that simulates a summons, complaint, judgment, or other court process with the intent to…cause another to…submit to the putative authority of the document.” Texas Penal Code Section 32.48(a)(2). Metts clearly violated that statute. Perhaps, we should give Hayden and Seals the benefit of the doubt, because, we hope, they merely followed the judge’s orders.

The Texas Judicial Conduct Code applies to Metts, even though he seems to behave otherwise. Canon 2.A. provides “A judge shall comply with the law and should act at all times in a manner that promotes public confidence in the integrity and impartiality of the judiciary.” Metts seemed to launch a nuclear missile into that ethical canon.

Additionally, Metts seemed to violate Canon 2.B.: “…not lend the prestige of judicial office to advance…private interests of the judge or others…”

Metts seemed to violate Canon 3.B.: “A judge should be faithful to the law…”

Metts seemed to violate Canon 3.B.: “A judge shall perform judicial duties without bias or prejudice.” Acting as the plaintiff, the plaintiff’s lawyer, and the judge in the same case does challenge that Canon.

Metts issued the order without providing notice or the opportunity for Shirley or Montgomery County to be heard in violation of several of the Canons of the Judicial Conduct Code.

It’s frightening to consider that, in Metts’ courtroom, he believes he may act as the prosecutor, the plaintiff, the plaintiff’s lawyer, and the judge all in the same case. It sounds like horrific stories of corruption in the Old West before a just and true land such as Texas came into being.

Under the Texas Constitution, Article I, Section 13, known as the “open courts” provision, all litigants are entitled to the opportunity to redress their grievances and receive their day in court. The interpretation of that provision is somewhat peculiar, but, either way, litigants clearly do have a constitutional right – under Texas and federal law – to notice and the opportunity to be heard.