GOP Treasurer Wertz faces off with Conroe ISD Board of Trustees, sums up citizens’ feelings 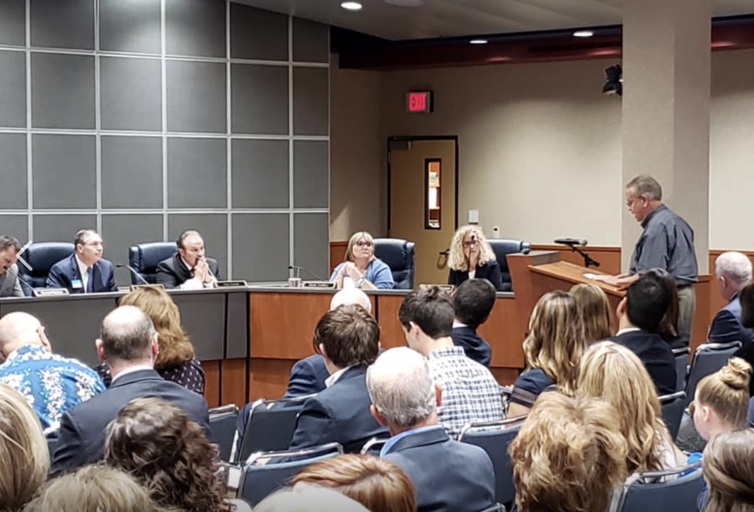 Image: Montgomery County Republican Party Treasurer John Hill Wertz confronted the Conroe Independent School District’s Board of Trustees on Tuesday, May 21, 2019, in the first remarks they permitted from citizens since the school district lost its $807 million tax hike and bond referendum on May 4.

Conroe, May 25 – In the first opportunity Conroe Independent School District’s Board of Trustees permitted for citizens to speak directly with the Board after the school district lost its $807 million bond referendum and tax hike on May 4, 2019, by a near-landslide margin, Montgomery County Republican Party’s elected Treasurer John Hill Wertz confronted the seven elected servants who are supposed to represent the taxpayers. Wertz didn’t mince words in his remarks to the Board.

Wertz’s remarks perfectly summarize the problems the scofflaw school district and its Board have created, particularly in light of the fact that the Board has failed to manage and oversee CISD for many years.

Good evening President Williams, members of the board and Dr. Null.

“Conroe Independent School District is an exceptional school district. It comes as the result of dedicated administrators and teachers, as well as highly motivated students.

“However, that’s no license to ask for a blank check from hard-working taxpayers, many of whom are struggling to pay the lofty taxes handed down by the same ISD.

“When I first heard about the $807 Million bond, I was shocked.  How on the heels of a $400 million bond just 4 short years ago, was something of this magnitude warranted, considering CISD was already $1.3 billion in debt with school taxes that consisted of one-half of all property taxes?

“As I started digging into this bond, red flags began popping up immediately.  First was the traditionally “low” turnout May election date. We soon knew why. With a day off during early voting for school teachers to boot, it was to maximize support staff and teacher turnout only. Looking at the early returns, objective achieved. And you now complain about low turnout!

“Whether you know it or not, whether it was the heavily establishment-weighted citizens committee, the $150 million “remodeling” of Conroe High School (same price as newly built Grand Oaks High School), the two pairs of schools requiring the same exact amounts for construction ($11,236,000 – College Park High School and The Woodlands High School and $11,910,160 for Caney Creek High School and Oak Ridge High School), the out-of-thin-air replicating of numbers in so-called estimates of costs for new things in the bond across the district, such as numbers $21,562.50 and $7,187.50, that as themselves, as well as multiples & divisors thereof, were used hundreds of times – a page right out of a derivative of Benfords’ Law that internal auditors use to expose fraud – as well as the nearly 40% cost increase of 3 elementary schools (from $27 Million 2 years ago to $37 Million in the bond), this bond was doomed to fail.

“The unholy relationship and alliance between the district and Pbk Architects in this election has put a sour taste in everyone’s mouth.  It was discovered that the latter, an architectural firm specializing in constructing fancy buildings using taxpayer money, actually had a political arm that strategizes with school districts on how best to help PBK make money, at whatever cost to the taxpayers.

“I don’t know if you’re embarrassed by this fiasco or not, which had no benefit to educational outcomes.  If not, you should be.

GOP Treasurer Wertz faces off with Conroe ISD Board of Trustees, sums up citizens’ feelings added by admin on May 26, 2019
View all posts by admin →