Examining the Most Expensive Fishing Trip in Montgomery County History! 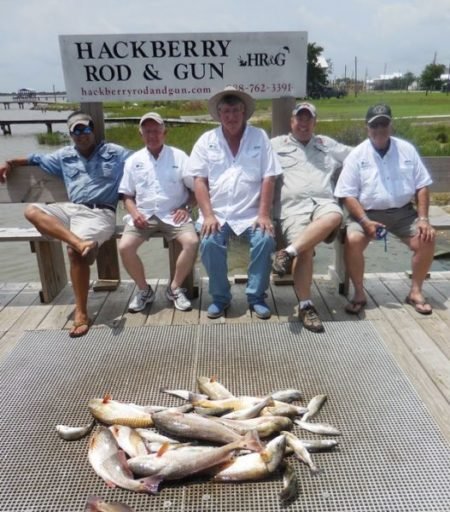 Two confidential sources have confirmed that the United States Federal Bureau of Investigation is presently reviewing the transactions related to the construction of the Joe Corley Detention Facility and the Montgomery County Mental Health Treatment Facility, which became a subject of discussion over the rods and reels.

Each year a majority of Montgomery County’s Commissioners Court and many other members of the glitterati of the Montgomery County political establishment converge at the Hackberry Rod and Gun Club in Hackberry, Louisiana, for about three to four days to enjoy great lodging, fishing, gambling, hunting, boating, all the liquor you can hold (and more), and a great time for all outside of the watchful eyes of the citizens of Montgomery County who will remain back at home working hard to earn the money to pay the taxes to support the political establishment’s lifestyle.

County vendor LJA Engineering, Inc., pays for the entire trip except that the glitterati have to pay for their own transportation to the location near Lake Charles. Of course, the arrangements include free use of fishing boats as well as free shuttles to the casinos in nearby Lake Charles.

Regular attendees to receive gifts of lodging, food, drinks, entertainment, and transportation to and from the casinos all paid by the County vendor are:

Courtney Brand, LJA’s Director of Public Relations, has made most of the arrangements for the junket and, of course, provided the invitations and itinerary.

During the last weekend of June, 2014, three people went fishing together at Hackberry: Meador, Rinehart, and Chance, along with a few others. Their pal, Doyal, spent most of his time during the weekend at the nearby casinos, although he joined his Commissioners Court friends for drinks and vittles at the Hackberry facility a bit too, according to two confidential sources, one of whom actually attended the event.

The fishing trip became an expensive one for the citizens of Montgomery County, because an eery change in Commissioners Court policy occurred during and after the trip. Here’s what happened.

On November 4, 2013, in a motion which Precinct 3 County Commissioner James Noack made and which Rinehart seconded, the Commissioners Court voted unanimously to authorize J.D. Lambright, the Montgomery County Attorney, “to pursue all claims and legal remedies related to the construction of the Joe Corley Detention Center and/or the Mental Health Treatment Facility and further authorizing payment of all invoices received from vendors associated with the County’s pursuit of the claims and the County Attorney to incur expenses as necessary for representation with respect to said claims.”

It’s important to note that the November 4 Commissioners Court vote occurred after an Executive Session on the subject during which Lambright specifically discussed with the Court the identities of the targets of his investigation into alleged wrongdoing related to the construction of the two County facilities. In other words, the Commissioners Court members knew the names of the targets when they authorized Lambright to proceed.

Lambright sent demand letters to the three primary targets of his office’s investigation on December 6, 2013. The targets were:

Lambright demanded that Chance pay $500,000 to Montgomery County, that Breazeale pay $242,275 to the County, and that Galloway pay approximately $12.1 million to the County.

Within a few weeks, Chance’s attorney, Houston criminal defense lawyer Mike Hinton, and Breazeale’s attorney, Scott Brazil of Houston, responded to the demands and denied liability on behalf of their clients.

Hinton and Brazil claimed that Lambright was “defaming” their clients, although Lambright denied that he had discussed the County’s allegations against Chance and Breazeale with anyone.

Meanwhile, Chance, in a sworn affidavit, admitted that he had, in fact, received a loan from a company named Blackrock Financial, which Galloway owned.

Chance and Meador, as members of the Commissioners Court together, were very close friends and allies. Chance spent many hours at Meador’s Precinct 1 Commissioner’s Office discussing the Corley and mental health facility projects.

In June, 2014, Meador made a motion in the Commissioner Court to end the County’s investigation of Chance and Breazeale, because, Meador claimed, there was “no evidence” of wrongdoing. Meador’s motion died in the Commissioners Court for lack of a second.

The fishing trip changed everything!

But then along came the infamous LJA fishing trip at Hackberry Rod & Gun. At the end of June, 2014, Chance, Meador, and Rinehart spent a lot of quality time displaying their virility by catching fish. During some of the evenings Doyal joined them to wash down his sorrows from his bad luck at the gaming tables in nearby Lake Charles.

When the three fishermen and one gambler returned to Montgomery County from southwest Louisiana, the assistant county attorneys in Lambright’s office noticed a distinct change in the attitude towards their investigation of Chance, Galloway, and Breazeale.

On a motion by then Precinct 2 County Commissioner Craig Doyal, seconded by Chance’s close friend Meador, and supported by Rinehart, the Commissioners Court voted 3 to 1 to pay Chance $40,000 (!!!) and Breazeale $10,000 (!!!) to resolve the entire dispute directly against County Attorney J.D. Lambright’s advice. Only Noack voted against the resolution.

Individuals inside the County government believe the County failed to pursue valid breach of fiduciary duty claims in excess of $12.8 million, while, of course, Chance and Breazeale deny everything.

Many argue that the County lost $12.8 million during LJA’s fishing weekend in 2014. Clearly, Lambright was not too happy about the actions of the Commissioners Court while he was out of town, although he declined to speak with The Golden Hammer for this article.

Either way, it was a very expensive fishing trip for the citizens of Montgomery County, who threw all chance of negotiating any recovery into the lake, although Chance, Rinehart, and Meador appeared to make a catch.

Examining the Most Expensive Fishing Trip in Montgomery County History! added by admin on September 26, 2017
View all posts by admin →